African Soldiers in World War One 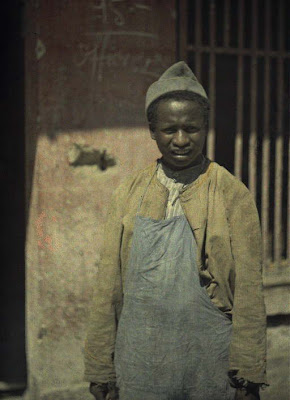 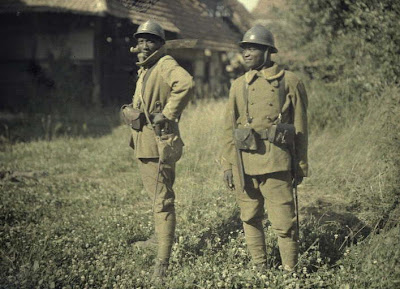 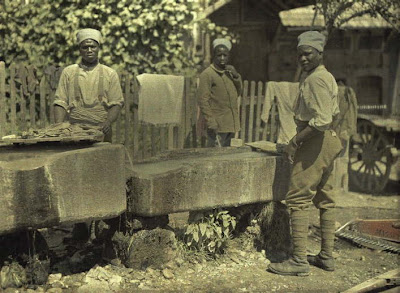 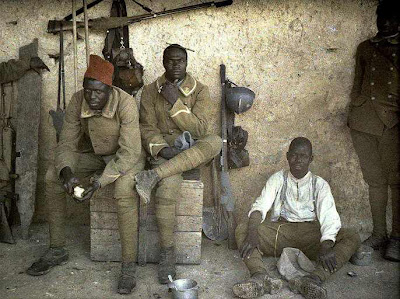 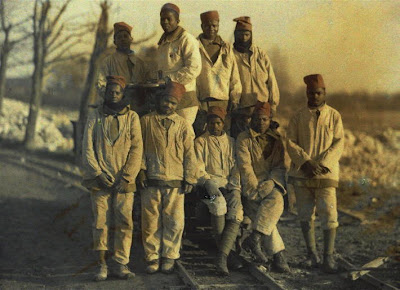 The idea that the Great War was an essentially European event is gradually changing.

The enclosed photos are of African soldiers who fought alongside the French Army in World War One and are rare examples of contemporary photographs taken and reproduced in colour, bringing the conflict to light in a powerful new way. The images are of Senegalese and Algerian soldiers and are contained along with hundreds of others on a French language web site here. Many are reproduced on the English language World War One colour photos site here.

The story of African soldiers in the First World War has received little attention at a popular level until recently. The facts are that both and drew heavily upon their colonies for manpower during the war. An estimated 500,000 Africans were deployed in the French and British forces; some as labourers, others as fighting soldiers.

Of the 1,186,000 French troops killed or missing in action in WWI, 71,100 were from the French colonies of , , , and . Fatalities included thousands of Muslim soldiers. In 2006, a memorial to Muslims killed at the battle of was inaugurated by then French President Jacques Chirac.

supported during the conflict. The South African Brigade (consisting primarily of white career soldiers and so-called coloured/mixed-race soldiers) saw active service at the Battle of the Somme, the Battle of Aras and the Third Battle of Ypres and suffered 15,000 casualties during the war.

A major loss of life occurred when the SS Mendi was sunk in the in 1917. Over 600 black South African soldiers – members of the African Native Labour Corps - drowned in the tragedy. Black South Africans were not permitted to serve as front line troops in and only the white officers on board received any official recognition for their loss in the Mendi incident.

Africa’s other main contribution to the First World War was as an arena of battle – in fact, the first and last shots of the war were fired in Africa. In Tip and Run, Edward Paice Phoenix describes the opening hostilities on the boarder of German Togoland as the British West African Frontier Force attempted to protect British shipping from German colonial forces. In East Africa, meanwhile, the British navy was shelling German positions in in modern-day .

The War in saw 200,000 soldiers – all volunteers - involved on the British/South African side against German colonial forces, with over 10,000 black and white soldiers killed. The conditions were extreme and many deaths were exacerbated by the grueling climate, malaria and dysentery. Eventually the South African forces (allied with numerous Indian regiments) were replaced by troops from the British colonies in modern-day , , and .

South African writer Hamilton Wende has argued that the experience gained by black Africans who fought in the East Africa campaign was one source of inspiration for the liberation movements that emerged in in the decades following the War as “white and black screamed and died together in the simple equality of human suffering.”

Private Wayne Miner of was the last American soldier to die in World War I and was one of the many African Americans who participated in black regiments during the War. Their story is told in a number of publications. One contemporary account is History of the American Negro in the Great World War by William Allison Sweeney (originally published in 1919) which is now available as a free ebook from Project Gutenberg. Click here for the download options.

Jami Bryan has written a helpful introduction to the African-American experience in WWI here.

The Right to Fight: A History of African-Americans in the Military

If you enjoyed this post, get free updates by email or RSS
Posted by Al Shaw

I read that troops from Nigeria,Barbados,& other warmer climates suffered from inadequate
boots from UK & France in WWI along with racism.NorthsideRasta@yahoo.com

I haven't studied the issue of supply and kit distribution between different races in the War.

It would be surprising, in light of the prevailing racial assumptions of the time, if such discrimination did not take place.

Have you got a link on that issue you could share?

Thanks for dropping by.

I am preparing to write a screenplay regarding WWI and the support from the Native Africans. We are currently in possession of the only known "Distinguished Conduct Medal awarded to a Nigerian soldier. It is extremely rare and was awarded to the soldier twice. Racism was without a doubt apparent during the that time. Whereas, the DCM awarded was in equivalence or should had been a "Victoria Cross". Anyhow, all information would be much appreciated, there is not much out there regarding the African soldiers in comparison to the other allies involved during WWI. I look forward to your response.

Would you like to write we guest post here on the play - either now or once it's finished?

The links from this blog post have a lot of information that might be relevant - especially some of the books.

All the best with the play and thanks for commenting.

This racialism is rubbish the normal every day British squaddie had nothing to gain from either WW1 or WW2 all was for the elite classes in our societies which are still in charge today I served my dad WW2 my granddad WW1 what for I ask ? The Royals are still here as and are born into elitism they don't wait for NHS they have several massive council houses and to rub salt into the wound they are German.

The people that annoy me most to the core are those so full of themselves that they cant even accept the truth. Africa was officially colonised in 1884 after the berlin conference hosted by chancellor bismark. The last country to be sovereign was in 1990 south africa. We call a horn a horn. Go figure

I am Kenyan.My great grandfather was taken to Myanmar/Burma in WW1[word of mouth] no records at national archives in Nairobi. Where can I find records of recruits from East Africa especially those recruited around Kisumu?

You have got me stumped with that question I'm afraid.

My guess (and it's nothing more than that) would be as a starting point to try and find out which regiment your grandfather was attached to. If it was part of the British Army, then that regiment would have its own archives in the UK. Many of these archives are now online. I simply don't know what the policies were on recording the details of those recruited from East Africa at this time, especially if they were labourers or other non-combatants.

A search for the African Native Labour Corps may also be a start, though I understand that many from this group were recruited from southern rather than east Africa.

Good luck with your research, and thanks for dropping by.

Do you know a good website to find pictures of uniforms and maybe even Germans from World War I?

I suggest anyone who's interested in this, should see Adama - link here:

which talks about this in a creative and very clever way. It opened my eyes and there should definitely be more awareness about it. Lest we not forget, for they are our brothers and sisters, regardless of race and color or religion.

gman said...
This comment has been removed by a blog administrator.
1:35 pm

This is my first time visit at here and i am in fact happy to read everthing at one place.