Peru: Is This an Oil War? 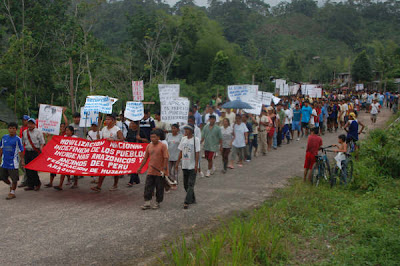 In scenes reminiscent of the American frontier during the C19, this week has seen a state of emergency declared and the Peruvian Army ordered into the country's Amazon region to help the police put down a protest by indigenous tribal groups against the granting of oil drilling permits to multi-national companies.

As previously reported on this blog, Anglo-French group Perenco is sending about 1,000 workers into the Peruvian Amazon to drill in lands which contain significant numbers of native Amazonian tribes, including several that have had no contact with outside cultures and are therefore particularly susceptible to imported disease. Canadian petrochemical firm Petrolifera are also active in the region in the Ucayali Basin, and control about 4.5 million acres in Peru.

Perenco's operations are in the Maranon Basin near the boarder with Equador in an area that it claims holds over 300 millions barrels of oil which it hopes to extract at the rate of 100,000 barrels per day. Perenco secured the drilling rights after Perenco President Francois Perrodo met with Peruvian President Alan Garcia Perez and pledged to invest $US 2 billion into energy-related development in the area. Perenco plans on drilling over 100 wells, building local pipelines and central processing facilities in the area, which is home to the Cacataibos, Isconahua, Matsigenka, Mashco-Piro, Mastanahua, Murunahua and Nant tribes.

American energy company ConocoPhillips owns a concession of over 10 million acres in the Peruvian Amazon and has been criticised by NGO Amazon Watch for the risk their operation poses to indigenous people groups who have chosen a policy of non-contact in order to preserve their traditional culture and to protect themselves from disease.

Directives by the Government of Peru passed over the last two years have relaxed restrictions on oil exploration in the Amazon and up to 30,000 people have been holding a month long protest to call for the repeal of these decrees. There have also been blockades of key rivers and roads into the affected areas, as illustrated in the video below.

A British friend and long-time resident in Peru recently told me that the public money pledged to educational and health care improvement among the Amazonian tribes rarely reaches its intended recipients and that corruption in all levels of government is known to be widespread.

Up to date news and fuller details about organised campaigns to stop oil and gas exploration in the Peruvian Amazon can be found here.


If you enjoyed this post, get free updates by email or RSS.
Posted by Al Shaw